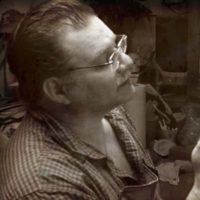 Daniel was born in Pittsburgh Pa. into an artistic family, where his mother and grandmother were doll artists. Daniel’s artistic awakening stemmed from the story telling paintings and sculptures that he was surrounded by in the Catholic Church that he attended as a child. These powerful influences fired Daniel’s imagination, and sent him down the road to telling his own stories through his art.

While attending art school, Daniel had the rare privilege of apprenticing with master artist, illustrator and storyteller in paint, Ken Laager. Ken schooled Daniel in the Howard Pyle School of illustration, where the focus was on characterization, mood and setting. Within Daniel’s career as a painter, sculptor, and doll maker, he has been fortunate to have over 400 published paperback covers to his credit, and a prize-winning children’s book. He has paintings and one of a kind art dolls, in galleries and many private collections from Hong Kong to New York. Daniel also had the honor of painting an 8-foot painting that appeared in the Guillermo del Toro movie, entitled Crimson Peak.

More recently, the theme “America’s Quiet History”, (the lesser known events in our nation’s history), has become the focus of Daniel’s art, as well as his newfound love of creating images of Christmas and Santa Claus. Daniel resides in Cherry Hill, NJ with his wife Joy, and has two children, Jennifer and Andrew. Daniel lives by the quote that the father of American illustration, Howard Pyle so aptly said: “Throw your heart into your paintings and leap in after it.” 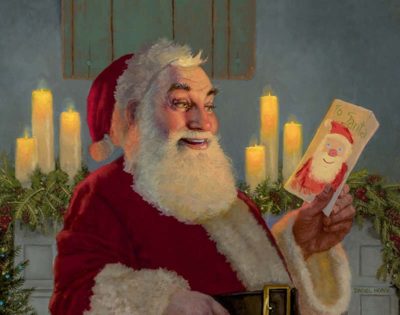