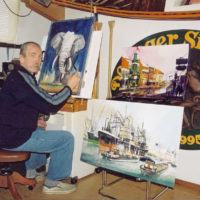 Hendrik de Jager was born in Rotterdam, Holland in 1940. He started drawing and painting when he was young. Hendrik has a natural talent for art and is primarily self-taught. He was educated in Rotterdam and became interested in architecture. Eventually he chose the profession of sign designer and worked at various sign shops throughout Holland.

In 1967 he married Carla Verloop in Holland and in that same year the two immigrated to Canada. They settled in Edmonton, Alberta, where Hendrik began his own commercial sign business. It was in this business that Hendrik developed his own intricate and creative method of sign creation. He created three-dimensional cedar signs, which were heavily decorated with his own fine artwork. These cedar creations were not merely signs, but beautiful works of art. These masterpiece signs are displayed all over Canada, with many in Alberta and British Columbia. After thirty years of intense involvement in the sign business Hendrik now devotes all his energy to his love of watercolours.

Even though Hendrik worked as a sign designer it is drawing and painting, especially creating watercolours, that has remained the primary focus in his life. He draws inspiration for his art from various places and experiences. The people and places of Canada have been an ongoing wealth of artistic inspiration for Hendrik. He particularly enjoys canoe trips down the Coppermine and Nahanni rivers, which allow him to spend time painting in the great wildernesses of Canada. As well, his adventures throughout Europe have helped to inspire some of his most beautiful paintings.

Hendrik has developed his own unique style of watercolour painting in which vibrant colours and spontaneity create remarkably beautiful individual works of art. He enjoys painting flowers, ships, landscapes and cityscapes as well as portraits of individuals from interesting cultures around the world.

Hendrik’s paintings have been shown in numerous galleries throughout Alberta and Holland. He has attended art workshops all over Canada and Holland. He continues to spend most of his time painting, but he also continues to create ther works of art in the medium of wood including hope chests and other decorative knives. 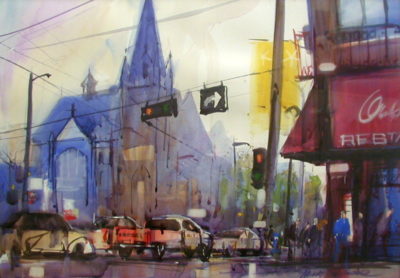