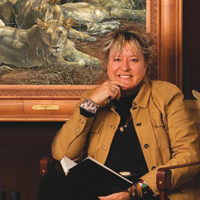 Jan Martin McGuire is known as an artist and naturalist who paints nature’s diversity. Born in the foothills of the Rockies in Colorado she developed an early love of the out of doors. As an inveterate tomboy she spent her days climbing trees, catching snakes and drawing the animals she loved. This love of nature stayed with her when her parents moved to Oklahoma when she was twelve. Recognizing her art ability, her parents encouraged her to pursue her calling by enrolling her in art classes at the local art museum. She continued her studies by majoring in fine art at the University of Tulsa. The curriculum of totally modern/abstract art soon stifled Jan however, and she quit to follow her own path.
Since turning professional in 1983 Jan has exclusively depicted the nature and wildlife she holds such a bond with. She depicts Africa, Rainforest, and North American subjects with equal expertise. Studying nature and all its intricacies is a passion of Jan’s. She strongly believes that to depict nature in such a way as to evoke emotion from the viewer, the artist must experience all the nuances of the out-of-doors. To touch the velvety textures of moss, to smell the pungent spruces in a marshy bog, to let the whistling wind of the tundra lift your hair from your forehead – all these things must be inside an artist to be able to come out convincingly from the end of a paint brush.

Jan travels extensively in a constant quest to satisfy the gnawing hunger inside her, which is to learn and experience nature in everyway she can. Jan has traveled extensively all over North America including Alaska, British Columbia, Ontario, Yellowstone, Montana, the Everglades and the deserts of the Southwest. To study neo-tropical rainforest Jan has traveled to Guatemala, Peru (where she lead a group for the National Zoo upriver on the Amazon), and Costa Rica. However, Jan is totally hooked on Africa – traveling for ten years to this continent. Her preferred country is Kenya but she has also been to Zimbabwe, Namibia and Tanzania. Jan and her photographer husband James enjoy sharing their experiences there so much they have begun leading groups of artists, collectors and anyone else interested in the natural history of Africa to Kenya with them.

At home, Jan’s extensive library of natural history books, field guides, and videos help sustain her hunger when she is in her studio. Drawing on all these experiences, in combination with the visual tools of the photos, sketches, study skins etc. she has at her fingertips, Jan sets about creating the art that is her homage to the nature she loves.

Working in Acrylic paint on fine cotton canvas, and once in a while on smooth masonite panels, Jan creates the fine details, textures and lighting that are the hallmarks of her work. Manipulating the paint with her brushes, sponges, saranwrap and fingers, Jan creates lifelike renditions of fur, feathers, mosses and rocks. The surrounding habitat is always scientifically correct, yet an artistic backdrop to the main subject of the wildlife she is depicting. Jan’s goal is for the viewer not to feel as if they are viewing a fine painting, but rather, that they are actually seeing and experiencing the scene itself.

Jan’s work has hung in many prestigious venues including the SMITHSONIAN MUSEUM, LONDON’S NATURAL HISTORY MUSEUM, NATIONAL GEOGRAPHIC SOCIETY AND GILCREASE ART MUSEUM. She has also had a person show at the DALLAS MUSEUM OF NATURAL HISTORY and WOOLAROC MUSEUM and most recently she had her first solo show in New York of her African wildlife paintings.Painting Safari: Jan Martin McGuire’s scenes from the African wild which hung in the corporate gallery of FORBES MAGAZINE on 5th Ave. in New York, March 21-May 3, 2008. Jan has had her paintings included in many BIRDS IN ART exhibits at the Leigh Yawkey Woodson Art Museum as well as most of Society of Animal Artists ART AND THE ANIMAL exhibits.

Her work is in many private and corporate galleries worldwide including FORBES MAGAZINE, PEREGRINE FUND/WORLD CENTER FOR BIRDS OF PREY and RAYMOND JAMES CORPORATE OFFICES in Florida.

Jan’s paintings have appeared in numerous books and magazines including NATIONAL WILDLIFE FEDERATION, U.S. ART MAGAZINE, THE ARTIST’S MAGAZINE, WILDLIFE ART MAGAZINE, AMERICAN ARTIST AND INTERNATIONAL ARTIST MAGAZINE. Recently she had the prestigious honor of having her work on the cover of SOUTHWEST ART MAGAZINE (April 2007). This was in conjunction with a story about an Award of Excellence that she won from the SOCIETY OF ANIMAL ARTISTS. She also had a story in two international magazines: AFRICA BIRDS AND BIRDING and AFRICA GEOGRAPHIC MAGAZINE. Jan also had the cover and a feature article in the January/February 2008 issue of WILDLIFE ART MAGAZINE. Jan has two books of her own out including a children’s book she wrote with her husband James and a how to book withNorthlight books. Her work also appears in several group inclusion books including BEST OF WILDLIFE ART I and II and WILDLIFE ART. Her paintings have also been auctioned by Christies of London and Bonham’s of Singapore.

Jan currently lives in the Osage Hills of Oklahoma. She shares her life with her husband James Gary Hines II who is a nature photographer. They share their home with a menagerie of animals including a macaw, cockatoo, boa constrictor, African leopard tortoise and 2 wolves. 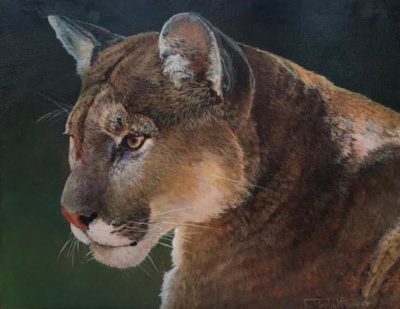 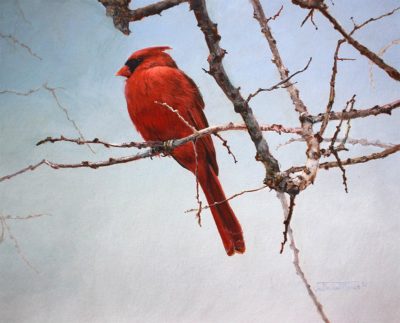 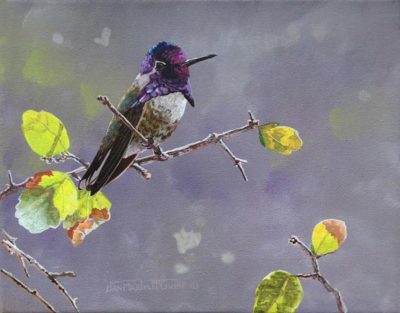 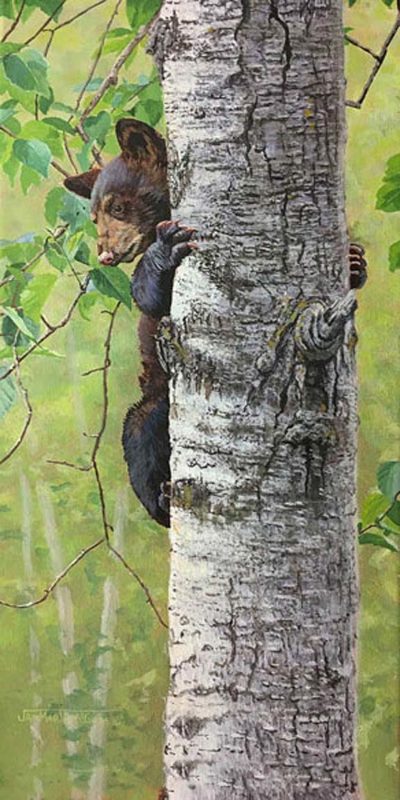