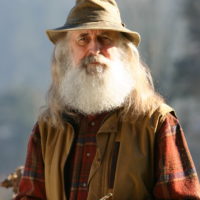 Murray Phillips retired from painting in 2017 after a long and rewarding career as an artist.

Other artwork similar to this artist:

Murray is a readily recognizable and well known Canadian artist. With a long beard and hair, and comfortable attire, he is quiet and thoughtful by nature. Although he has been painting for more than 45 years, much of Murray’s life has been lived in the halls of academia where he holds graduate degrees in Theology and Cultural Anthropology. For over 20 years, he taught in a variety of colleges and universities. His interests are many, including classical guitar and sailing, but an abiding love has been his desire to paint. ”There is an intense urgency to paint, as if something important needs to be said, and I can only say it with brush and canvas.”

Murray has a strong desire to express the spiritual in his paintings. The primary focus of his work is the Canadian Wilderness – particularly the West.  He spends several months each year camping in isolated areas.  He paints relatively large canvases on location travelling to several locations in a day and returning the following days to the site at the same time to capture the same light.  He may work on one canvas for several weeks.  Murray’s paintings reﬂect his love for nature. “I feel most at home in the wilderness where I spend several months each year. I have a variety of studios, but my favourites are my canoe, sailboat or my tent trailer, which enable me to transport my studio to the painting site.”

There is a rich heritage of connection between Canadian artists and the land.  Tom Thomson and the Group of Seven initially painted the Canadian North (Algonquin and Algoma). This connection has never been more important than today when we are losing our relationship with the wilderness and see the wilderness primarily as a playground for our high powered toys.

Murray is presently working on a book of his paintings advocating a renewed connection with the wilderness and its inhabitants.  He also is frequently asked to speak on our relationship with both art and the wilderness.  Murray is a Signature Member of the Artists for Conservation which includes 500 members from around the world.  Recently he was nominated for the prestigious Simon Coombes Award given to an artist for outstanding contribution to Conservation.

The year 2013 was a year of enormous loss for Murray, as Betty, his loving wife of 46 years passed away. She was a source of much strength and encouragement for him accompanying him to many of his shows and exhibitions. Painting has been an important part of the grieving process for him.

Murray Phillips retired from painting in 2017 after a long and rewarding career as an artist.