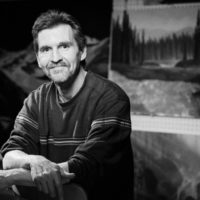 Roger D. Arndt’s hallmark scenes of towering Rocky Mountains, western forests, Pacific shores and gardens have captured the attention of fine art collectors world wide. Roger Arndt’s work is distinguished by a luminous and mystical quality that stirs inspiration in all who see his work.Roger D. Arndt began to see the world through an artistic eye at the age of twelve, when he set out on his journey into the world of fine art.  In the early 1970’s, at the age of fourteen, Roger became inspired by the art of Loren D. Adams, Jr., a well-known seascape artist who was working out of Vancouver’s Granville Island district. Roger became an apprentice to Adams. Through careful observation and Adam’s mentoring, Roger nurtured his own talent. He learned how to put paint on canvas, and express his vision through his brushes.

In those early years, the artist focused mainly on seascapes while his talent blossomed and grew. In his late teen years, Arndt discovered his love for the Rocky Mountains. He spent several months each year exploring Alberta’s Lake Louise, Jasper, and Athabasca regions, hiking and camping at the base of towering mountains and ancient glaciers. Roger Arndt  was moved by the power and majesty of the mountains. His soul inspired, he began to paint these vast and glorious monuments. He also become fascinated with west coast Haida totems. He wanted to add structure to his paintings, and after studying the history of totems at the University of British Columbia, he began to incorporate them into his ocean paintings.

A Roger D. Arndt painting is a timeless work of art that marries the breathtaking subject matter of Canada’s West with fine craftsmanship and quality. Roger is a smooth brush oil painter who utilizes a centuries-old Flemish technique that was once practised by European Masters. His attention to detail is paramount, from the time he conceptualizes the image in his mind and prepares his boards, to the finishing and framing of the completed piece.

The preparation of an oil painting is a laborious one. First, a panel is coated with many layers of oil primer, then hand-sanded to achieve a surface that is as smooth as glass. Arndt  moves on to create an image in conceptual drawings, conceived from his own photos, sketches, memory and imagination.  Before starting the formal painting process, Roger prepares a scaled down, loosely painted oil study to test composition and colour elements.