Tom duBois has the gift of seeing the world through a child’s eyes. This is perhaps why he is so fond of a quote by Picasso, “Every child is an artist, the problem is remaining a child once you grow up.”

Graduating from Chicago’s famed American Academy of Art, Tom earned a reputation as a gifted artist and illustrator. His series for the Disney Discovery Collection brought him international fame. Lately, however, he has found inspiration in stories from the Bible.

People across America have been reintroduced to the story of Noah’s Ark with duBois’ vibrant images. A series of four, each painting depicts a different scene of the story, showing the Ark’s progress. Despite its considerable success, it is first and foremost a labor of love. The Promise was nearly a year in the making. Tom not only researched the story of the Ark, but sewed the costumes worn by his models. He traveled to several zoos, including those in San Diego, Chicago and Los Angeles, to sketch and photograph a variety of animals.  His faithful attention to detail is evident, the viewer will continually notice new things, seemingly insignificant details will reveal the considerable knowledge, faith, and skill that went into their creation.

A true Renaissance man, duBois has merged his love of God, art, poetry and music into an interesting and diverse ministry. As well as a fine artist, Tom is a poet, singer and storyteller.  He often appears at gallery shows with his acoustic guitar and sings to the amazement and delight of his collectors. 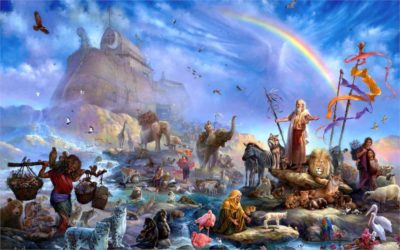