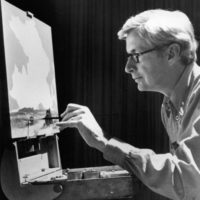 Hurley, born in Tulsa, Okla., has paintings hanging in the National Cowboy and Western Heritage Museum in Oklahoma City, the Oklahoma State Capitol, the Albuquerque Museum, the Panhandle-Plains Historical Museum in Texas, the Whitney Museum in Wyoming and galleries in Santa Fe, to name a few places.

Hurley, a West Point graduate, also was an attorney, engineer, fighter pilot and bank founder. But through it all, since childhood, he was a painter.

At age 40, Hurley started painting full time. A breakthrough came in 1966 when he visited a Monet and Turner show at the Museum of Modern Art in New York. He realized he didn’t have to follow anybody’s style, that he could look at the world and bring it to the canvas the way he interpreted it.

Hurley received numerous awards for his landscapes and more than 800 hundred of his paintings have gone into private and corporate collections. At least 10 museums hold collections of his work.

Hurley was inducted into the Oklahoma Hall of Fame in 1996 and was declared a cultural treasure in that state in 2002. That same year, he became the Albuquerque Museum Foundation’s second Notable New Mexican.

He has been recognized as one of America’s premier landscape painters. Wilson Hurley passed away in 2008 at age 84