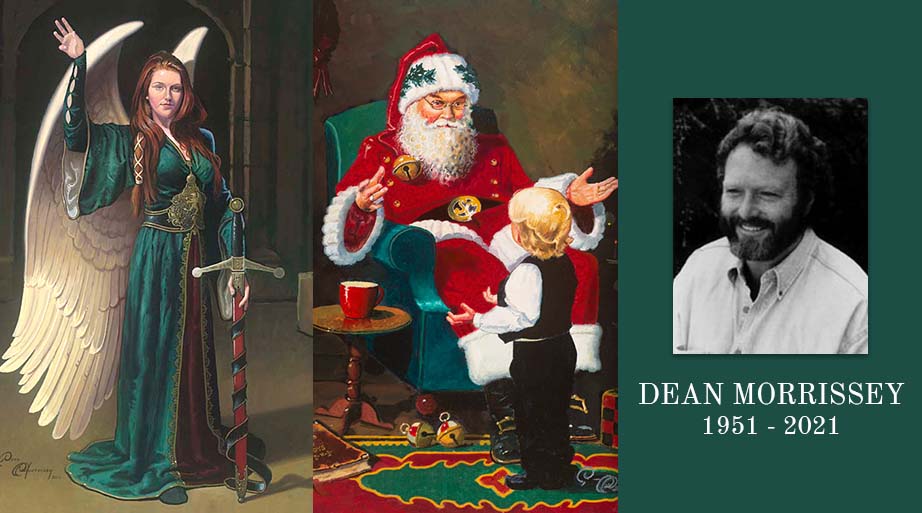 It is with great sadness, that we announce from Picture This, the passing of a very talented artist, Dean Morrissey. His legacy will carry on through his amazing Celtic art and wonderful depictions of Santa Claus.

MORRISSEY, Dean Walter – of Marshfield, formerly of Scituate passed away on March 4, 2021.  He was the husband of Shan (Crete) Morrissey, with whom he shared 33 years of marriage. He is survived by his wife and his daughter. He was the devoted and loving father of Ani C. Morrissey and the late Kate C. Morrissey. He was so pleased to have passed his creative genes to his beloved daughter Ani.

Born in Quincy on October 1, 1951, he was the son of Mary (Luce) Zimbone of Quincy, and the late Dennis Morrissey. He was a 1969  graduate of North Quincy High School and went on to become a lineman, where he met some of his greatest friends, Joel and Nelson. Dean was a self taught master painter. After many years of illustrating book covers, he began to write his own stories, and had huge success with his stunning book “Ship of Dreams” which won a Best Illustrated Book Award from the Society of Illustrators, and a the New York Times Book Review Best Illustrated Children’s Book Award.  Like one of his favorites, Norman Rockwell, his friends and family were models for many of his paintings. Dean continued to paint and write, publishing many other richly illustrated children’s books. Dean was also an accomplished guitarist, and cherished the years he played with John and Joe. Dean was also known for his sense of humor, and his Irish ability to spin a tale. Dean was a friend of Bill Wilson since the 1980’s, and left this world grateful for each day.

Message from the family:

As this pandemic changes the way we join together to mourn and celebrate our beautiful husband, father, brother and friend, there will be a Celebration of Life when the weather is warmer and we can gather again.

If folks would like to contribute to a charity in his memory, we have chosen the Cystic Fibrosis Foundation, www.cff.org, Father Bill’s https://helpfbms.org/,  and the Come as You Are Coalition www.cayacoalition.org

View the art of Dean Morrissey