Congratulations Guy Combes, from all of us at Picture This!

Reposted with permission from Artists for Conservation

Internationally acclaimed Kenyan artist Guy Combes has been recognized for his conservation leadership and artistic achievement with Artists for Conservation’s (AFC’s) top honor: the Simon Combes Conservation Artist Award. The award is especially significant in that it was established in memory of Guy’s father who was a world-renowned wildlife artist and prominent conservationist. AFC bestows the award annually to individuals for exemplifying the achievements and dedication of the award’s namesake.

AFC President and Founder, Jeff Whiting explains: “Guy is a remarkable artist who has made it his life’s work to protect the wildlife that inspires his art. It’s a special honor to recognize him for his work, given the family connection with the award. The last year has seen the loss of several conservation heros, including the passing of two prior Combes Award winners – David Shepherd and Pollyanna Pickering, as well as AFC Board Member Murray Phillips. Whiting adds “This year’s award is notable in that Guy isn’t just carrying on his father’s legacy or following his footsteps. He’s a true leader and accomplished artist in his own right, and someone who represents a new generation of artists rallying to the cause.” Guy joins a who’s-who roster of international recipients chosen for their artistic excellence and lifetime of extraordinary support of conservation, including David Shepherd, Robert Bateman, John Banovich, Robert Glen, Sue Stolberger, Pollyanna Pickering, Dr. Guy Harvey, Richard Ellis, John and Suzie Seerey-Lester,  Karen Laurence-Rowe, Guy Coheleach and Mark Hobson.

Aside from his career as an artist, Guy Combes is US Development Director for Soysambu Conservancy and sits on the board of Friends of Soysambu Conservancy, a US based non-profit fundraising organization. He has raised tens of thousands of dollars for a project to build mobile cattle enclosures to mitigate human-wildlife conflict and ensure that lions can continue to roam free on 48,000 acres of ideal habitat in Kenya’s central Rift Valley. This is especially crucial now that lions have been declared “vulnerable” on the IUCN Red List due to an alarmingly decreasing population.

Combes has also been involved in activism to stop environmentally insensitive development in the Serengeti and the destructive trade in ivory and rhino horn worldwide. He has raised funds for Action for Cheetahs in Kenya, Amboseli Trust for Elephants, Ol Pejeta Conservancy, The David Shepherd Wildlife Foundation, and many other grass-roots organizations with whom the artist has a personal connection. Guy has also pioneered an effective way of fundraising on social media with live auction painting sessions, creating the perfect nexus of artist, audience, and conservation philanthropy. Working from his studio in California and dividing his time between the US, England, and Kenya, Guy Combes uses his visibility as an international artist to draw attention to the plight of the wild things and wild places that have been so instrumental in his own development as an artist and as a human being. 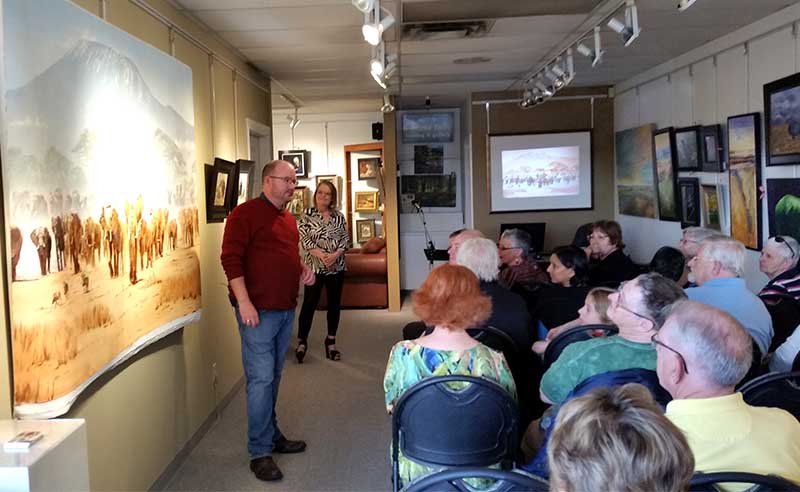 Guy Combes giving a talk at Picture This

In hearing of his nomination for the award, Guy reflected on his path to the present: “It seems not long ago I was pleased with myself that I could do a painting of a lion and sell it.  Now my paintings help protect lions, so that they can roam free in the wild.  This is the most rewarding thing I’ve ever done. While I mourn the loss of wildlife and wild places, I feel it’s more important to celebrate the triumph of nature in my work and to communicate the motivation I have to protect it.”

AFC’s Simon Combes Conservation Award was established in 2006 is the highest honour AFC presents to an artist member. The annual award has become the  world’s most prestigious conservation award for visual artists. The award’s namesake, Simon Combes was a prominent member of AFC until his tragic passing in 2004, when he was killed in an encounter with a Cape Buffalo near his home. Simon was Project Director of the Kenya chapter of the Rhino Rescue Trust, an organization founded in 1985 to protect endangered species from being poached, and to help the communities surrounding Lake Nakuru National Park affected by wildlife conflicts.

Artists for Conservation (AFC) is the world’s leading group of artists supporting the environment. Founded in 1997, the non-profit organization comprises a membership of 500 of the world’s most gifted nature artists from 27 countries, across five continents. Dedicated to nurture, promote and leverage its world-class community of artists in support of our natural world, AFC drives its mission through three key programs: Art & Environmental Education; Field Work & Research; and Artist Development. The Artists for Conservation Festival is AFC’s annual flagship initiative to showcase, support and further these programs. For more information, visit http://www.artistsforconservation.org.

Reposted with permission of Artists for Conservation. Original article here