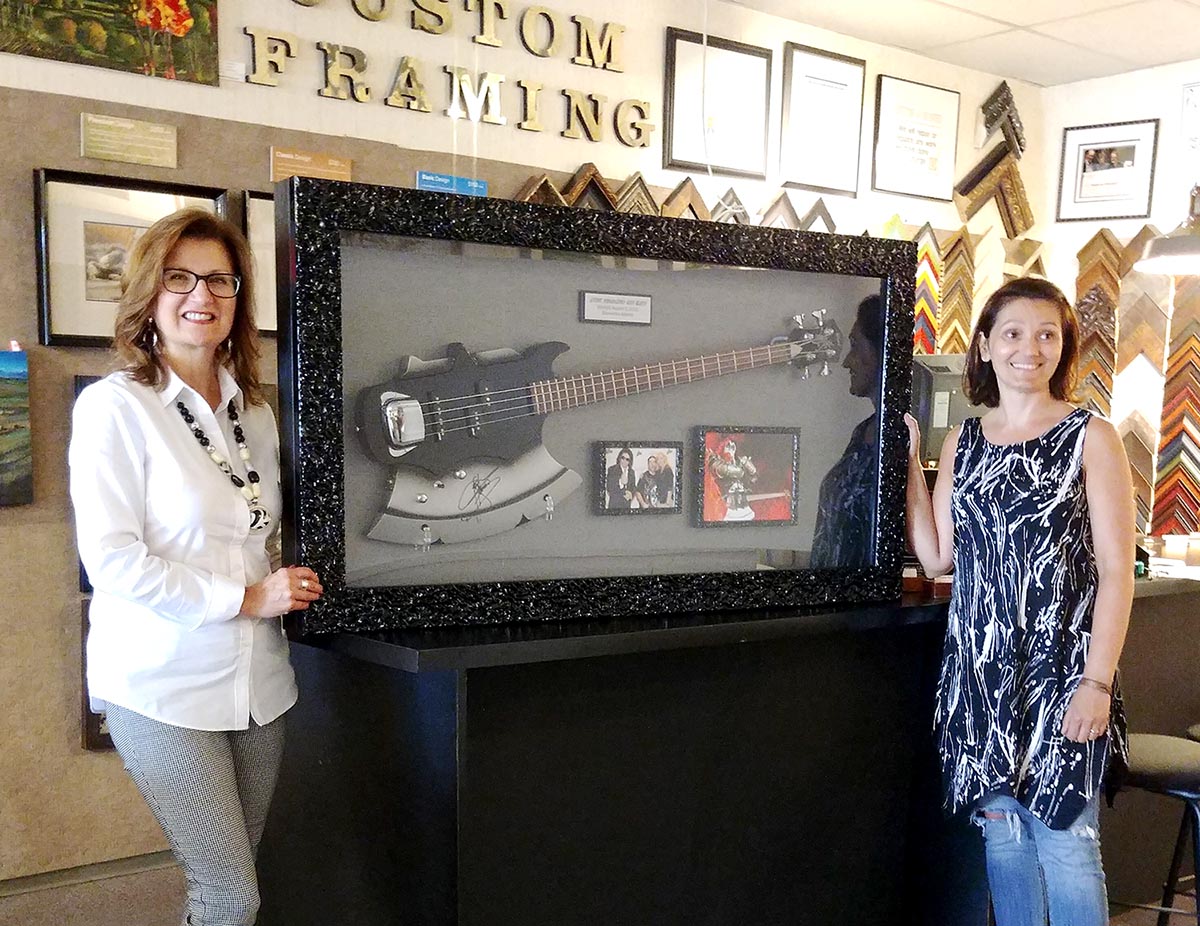 What would you grab if you had to quickly leave your house to escape a fire? For Fort McMurray’s Mike Chilinski this wasn’t a hypothetical question in 2016. The sports and music memorabilia collector was forced to evacuate with his wife and two children as forest fires began to ravage the city. “Decisions, decisions. We were at home and weren’t sure what was happening,” Mike recalls. “We were told we were good. We were told to leave. We were told we were OK. It was all pretty hectic. I’ve got maybe 7 jerseys framed and old Oilers stuff. I couldn’t take it all because I had to take food. I grabbed three things. I grabbed this guitar. I grabbed the computer because it has all of our pictures on it. And I grabbed our passports. Everything else is replaceable.” 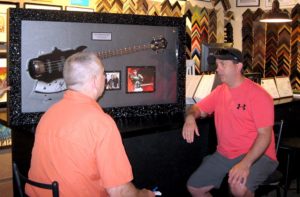 That guitar is a black and silver signed Gene Simmons Axe bass guitar. It was a prized possession for Mike and the one thing in his collection he knew he couldn’t get back. “Everything else is replaceable. You can always get another signed jersey from an auction site or something right? This I did myself. I put the work in to get it so it was coming with me. Even if I had to shove it in somewhere or my wife had to ride with it on her lap, it was coming with me.”

Challenges of Framing a Guitar

Luckily, their home was spared in the fire. The close call prompted Mike to get this spectacular instrument framed like his other collector’s items. Picture This! framing & gallery had framed his ‘80s era Edmonton Oiler jerseys so he trusted our team led by Art Consultant Sue Soucy to put together something special for the guitar. “Sue helped a lot on this one big time,” says Mike. “With the hockey jerseys it was basic black. When I came in for this I thought that’s what we were going to get, just a basic frame. She pulled this out and it was a different colour and I thought that’s interesting. Then she pulled out the black one I thought that looks gothic. The guitar suits it and the whole get up KISS has — I thought that would be excellent.”

“This especially was a real team effort,” says Sue. “We really work as a team to get all the aspects of what we’re choosing correct. It’s a collective to build and create a design that Mike is going to be happy with forever. This isn’t temporary, it is a whole team effort from design to build.” Framing stage of the guitar in the workshop

Even the small touches on the placard. The group researched the KISS font to get the tiniest detail right. While making it look good is the goal, the team also had to design it so it can be secure and safe. “It’s really heavy. Even the basic mounting from what we usually do with guitars,” Sue explains. “This is permanently mounted. So it’s a completely different process to engineer it, so that if it has a fall it’s going to be OK. It’s acrylic. It’s padded under the mounts. It has a neck holder. It shouldn’t come loose. If it slips everything should still be fine. This is the idea behind something like this. It’s a collectible. So our thought process goes beyond the basic looks of the design. It goes into how we can preserve this in case something does happen. Look at the fire. What if something does happen and you have to grab it off the wall and throw it into a vehicle? With this type of framing the guitar will be ok.”

Mike has been a fan of the band since the late Seventies when his dad gave him a KISS album. Over the years he has collected album covers, picture discs, drum skins, numerous photos and signed CDs. It was this guitar that was his pride and joy though. He had ordered it with the plan on getting it signed by Gene Simmons when the band paid a visit to Fort McMurray. “It was almost the Planes, Trains, and Automobiles type of thing,” says Mike. “After I ordered the guitar, maybe a few days before the meet and greet, the lady had it in her vehicle and tried to deliver it to the house but I wasn’t home. I had to track down the lady driving the delivery van and had to meet her in a school parking lot to get it. It was a huge ordeal.” Making it worse was finding out Gene would not be signing any guitars. Mike wasn’t deterred though as he brought it along to another meet and greet at the River Cree a short time later. 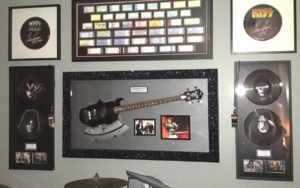 Framed guitar on display with other collectibles

Mike says he still has plenty of wall space in his basement for more collectibles and the planning is already underway on how he wants those framed. “Oilers and KISS are my big things. I was a huge Star Wars fan as a kid and now my 14 year old son is getting into it. So I’ve been collecting 8×10’s autographed photos of the main characters. So that’s going to be my next project.”