EDUCATION: Holly Carr is a graduate of the Nova Scotia College of Art and Design.

– Carr is widely known for her unique style of silk painting. Bold satirical images explore everything from human interactions and social stereotypes to her love for the natural world. Holly Carr’s sense of humour underlies all of her work pointing a finger at the absurd as well as the touching.

SPECIAL ACHIEVEMENTS:
– 2003, Carr’s  largest project to date the “Terrarium” was installed in the Nova Scotia Museum of Natural History, a 25’ diameter and 20’ high environment depicting the natural world.

-Ventured into theatre, beginning with designing for “Little Lame Prince” and “When Dinosaurs Dine by Moonlight” both of which were productions of Mermaid Theatre of Nova Scotia.

-painted live with an adlibbed monologue in Will Power Theatre’s production of “Private Views” performed live in the main gallery of the Art Gallery of Nova Scotia, where her dialogue with the audience was woven into a painting she created on the spot as well as the three one act plays taking place in the gallery space.

– performed with numerous musicians including a cross Canada tour with writer storyteller Stuart Mclean and the Vinyl Cafe. During these events Holly Carr paints live on large vertical panels of silk.

-Recently, Carr was invited to perform in Singapore, with world renowned violinist Min Lee, as well as performances in Ottawa where she painted with the National Art Center Symphony. 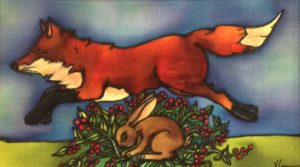 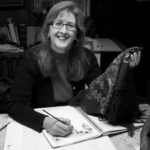 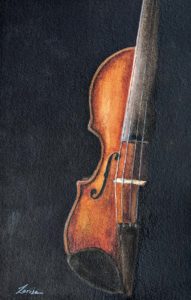 “This piece is inspired by my fascination with the the violin. It is a contemplation on the quiet moments when a violinist takes a break during rehearsal.”
– Larisa Cheladyn 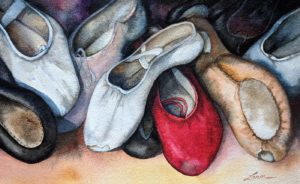 “A study inspired by the pile of worn dance slippers that inhabit the corner of my daughter’s room.”
– Larisa Cheladyn 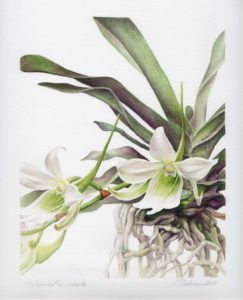 “Flowers in their natural habitat, with all their imperfections intrigue me. I love natural and scientific details captured in paint, but I also desire the artistic qualities of composition and value. While most orchids I see are in the context of an artificial culture and hybridized, Sobennikoffia Robusta is an orchid endemic to Madagascar. Watercolour has become a favourite medium for capturing the translucence and textures of petals, leaves, and roots.”
– Charity Dakin 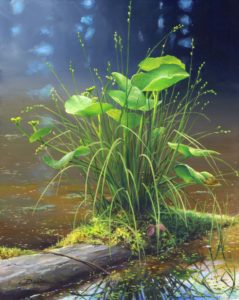 “The “Joy” Series is an naturalist’s exploration of the small spaces I find around an old beaver dam near my home. The landscape is characterisitically swampy and overlooked in terms of atheistic quality. However, closer observation reveals incredible gems of life and colour. “Emergence” features sun-lit sedges and emerging marsh marigold, and is the fourth piece of work in this series.”
– Charity Dakin

Special Achievements:
In September 2009, Dodge travelled to the Galapagos as recipient of the AFC’s tenth Flag Expedition fellowship, to spend forty days studying, sketching and photographing the unique animals and plants of the Islands.

The purpose of her expedition was to study through sketching, notes, photography and collaboration with local scientific experts, the endemic and endangered flora and fauna of the Galapagos archipelago. During her expedition, Kelly successfully explored ten of the thirteen islands in the archipelago, ranging from open sea and rock islets to the six distinct vegetation zones – each supporting specific communities of plants and animals.

Her objectives included partnering with local NGOs to support the preservation, restoration and enhancement of the Galapagos ecosystem with a goal of creating a major body of artwork featuring the diversity of endangered species living on the islands. Through her artwork, she placed a strong emphasis on environmental education, while highlighting the conservation challenges each species faces. Her studies, while in the field, encompassed endemic and resident birds, mammals and reptiles of the eight zones of the Galapagos archipelago.
Her goal was to observe, learn about and document as many of the endemic and resident wildlife species as possible as they relate specifically to the habitat zones that support and sustain them, and as they relate to each other both physiologically and behaviorally.

Kelly created a significant body of studio artwork inspired from her expedition, and the Lindsay Public Gallery in Lindsay, Ontario hosted a major solo exhibition focused entirely on the Galapagos.

On November 20, 2010 – Kelly Dodge’s Exclusive AFC Galapagos Flag Expedition Journal was reproduced as a limited edition coffee table book by the Artists for Conservation Foundation
Two years earlier in 2007, Kelly was the only accompanying artist on a previous Artists For Conservation Flag Expedition awarded to world renowned American watercolourist, David Rankin.In this expedition, David Rankin, accompanied by his wife, Deanna and fellow AFC member Kelly Dodge, travelled through Northern India. Their journey took them deep into the Himalayas to the Gangotri glacier, at the headwaters of the sacred Ganges River. David’s intention was to create a body of artwork that captured the beauty and ecological complexity of the Garhwal and Kumaon Himalayas with an emphasis on documenting the ecological and conservation challenges facing the Ganges River system.

“Pigs are pack animals so they crave attention and time with their loved ones. You’ll know when a happy pig wants a scratch or some snuggles because they have great communication skills — they can bark, squeal and even laugh. If a pig considers you their friend or family, you’ll be greeted with a happy squeal right before they roll on their back for a tummy rub. You’ll also definitely know when a pig is truly happy by watching for their little tails to start waggling.”
– Kelly Dodge 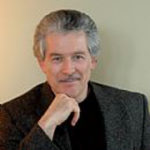 ‘Sparrow’s Rest’ by Michael Dumas was the recipient of the Dual Category Award. It is also selected for international exhibition, opening at the Salmagundi Club in New York City from May 12 -June 1, 2017. The exhibit will then be on view at the MEAM, the European Museum of Modern Art, in Barcelona, Spain from Sept. 23 – Nov 27. ‘Sparrow’s Rest’ was also selected for exhibition at the National Museum of Wildlife Art, Jackson, Wyoming Sept 7 – Oct 9, 2016.

Michael’s painting, ‘Innocence’ has been selected for the SAA exhibition tour and will be on display at The Hiram Bleauvelt Art Museum in Oradell, NJ, January 21 – March 12, 2017; Sternberg Museum of Natural History, Fort Hays University, Hays, Kansas, March 25 – May 12, 2017; Museum of the Shenandoah Valley, Winchester, Virginia, May 27 – Sept 3, 2017.

Two Dumas artworks have been accepted into the 2016 AFC International Exhibit of Nature in Art; ‘Innocence’ appears in the online virtual exhibition, and ‘Fox Sparrow Study’ for both the virtual and the live exhibit opening at the Grouse Mountain Resort, Vancouver, BC, Canada, September 29 – Oct 3, 2016. ‘Fox Sparrow Study’ is part of the exhibit tour, first to the Arizona Desert Museum, Tucson, AZ, Dec 10 – Feb 12, 2016, and then to Qingdao Lan Wan Art Gallery, Qingdado City, China, Aug 1 – Sept 30, 2017.

Dumas Artwork is included in two new book releases by North Light Books ; ‘Strokes of Genius 8’ – The Best of Drawing and ‘Art Journey: Animals’ – A Collection of Inspiring Contemporary Masterworks. 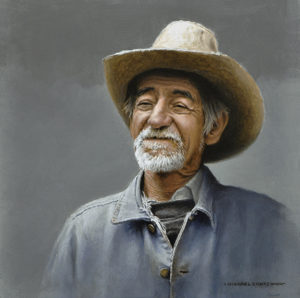 “I first met Luis on my way to see the earliest Jesuit mission site on the west coast of Mexico. The road to Mision Nuestra Señora de Loreto Concho leads up into the Sierra Mountains of the Baja Peninsula. I had asked my driver about a green patch in the distance that stood out against the otherwise desert environment of broken rock, sand, cactus, and other spiny plants. He smiled knowingly and told me we would stop there for a closer look. When we arrived an elderly Mexican man was walking out from a grove of fruit trees to greet us. I learned that when he was a young man he created a pond and irrigation channels from a small seep-spring he had discovered. His first plantings of fruit tree seedlings eventually covered an extensive area in the canyon, yielding enough fruit to sell to the market in Loreto. Luis proudly took us on a guide through his orchard, climbing a rickety ladder to fetch fruit to sample. What I remember most though, is a face that reflected a lifetime in the mountains. I have done three paintings of him to date, all focused on that wonderful face that seems to me to wear the Sierras themselves upon it.”
– Michael Dumas 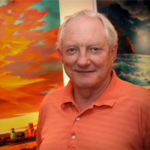 ART SHOWS AND EXHIBITS: Many shows with the Western Lights Artist group all over North America 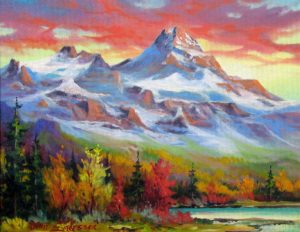 “Travelling through the Rockies and stopping to admire the peak of Mount Assiniboine. Majestic and imposing, dramatically set against the colours of sunset.”
– Jonn Einerssen 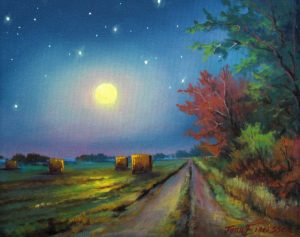 “Walking down the lane on a cool summer night. The moon and stars illuminating the landscape. Memories of childhood growing up on the prairies.”
– Jonn Einerssen

Graham Flatt is a western artist whose images reflect his passion for painting. Primarily self-taught in the areas of design and composition, Flatt has attended a variety of watercolor workshops over the years.  His dedication to painting has allowed him to experience many influences, which has ultimately resulted in his signature style of painting. Flatt is a very bold, direct painter with an emphasis on strong design elements. Working with a limited palette, Flatt maintains a delicate balance between passion and design.

AWARDS AND HONOURS:
Graham Flatt was awarded the Ralph “Tuffy” Berg Award for the Best New Artist at the 2000 C. M. Russell Auction of Original Western Art in Great Falls, Montana. Flatt is the only international winner of this award in its 38 year history.
His design for a 3/4 life size buffalo was chosen as one of only 24 for a C.M. Russell museum fundraising effort.
Flatt has gone on to win numerous other awards including “Best of Show” and “People’s Choice” in both Canada and the U.S.

CAREER HISTORY
Has painted professionally for more than 10 years.  Flatt has quickly emerged as one of Canada’s top western watercolorist with numerous sold out shows throughout Canada and  the United States. Recently, Graham has added acrylic painting to his repertoire and has begun exploring chalk pastels in conjunction with his dynamic watercolors.  His enthusiastic approach to watercolor and instruction has made Graham a sought after workshop instructor and lecturer in both Canada and the United States.

Working as a fulltime Artist has allowed Graham to travel all over Western Canada and the U.S. in search of ideas and things to paint. His artwork can be found  in corporate and private collections in more than 25 countries.

The artist is currently represented by galleries in Alberta Canada, Wyoming and Montana 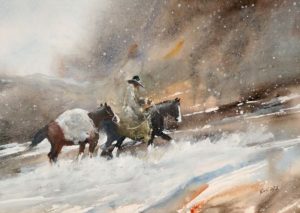 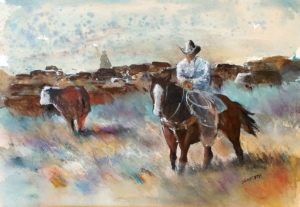 ACCOMPLISHMENTS:
He’s hiked and camped in mountains and forests throughout the northwest U.S., Central America and East Africa. He knows the lakes and mountains as well as he knows the plains and deserts, not to mention almost all the creatures who live there, from the smallest bird to the largest elephant. And he will paint them on whatever size canvas suits them best. In addition to his peaceful views of animals in their natural habitats, he is also known for his paintings’ many different sizes and shapes—each chosen to best suit his perfectly balanced images of wildlife and wilderness.

“For most of my life I’ve been at home in the high country of central Oregon. I always get excited about my fellow mountaineers when I take excursions to higher elevations. While I live in the Cascade Mountains I often take road trips to the Rocky Mountains of the U.S. and Canada. Mountain goats are very much at home on their rocky road trips!”
– Rod Frederick

“Sometimes a boy comes down from his home in the mountains to explore the lower elevations. A couple of years ago I was fortunate to visit some of the Maritime Provinces. While I typically paint the wildlife and landscapes I still get excited about the ability of a wild creatures to coexist with us humans. I’ve watched great blue herons in the mountains, on the coast, and everywhere in between. It was fun to see the familiar herons very much at home among the boats in the bay. As a personal touch I replaced the numbers on the boat with the name of my daughter!”
– Rod Frederick