BIOGRAPHY: An ardent interest in the beauty of Koi, and the diversity of their colors and patterns, has led artist, Terry Gilecki, to devote his artistic endeavors to capturing their essence in his masterful paintings.

Collectors all over the world have been buying these exotic images and, while Koi are the main feature of his work, Gilecki also likes to include their surroundings by merging the elements above and below, as well as those reflected on the water’s surface, in his paintings…

Born in 1954 in British Columbia, Gilecki received a diploma in Commercial Art in 1973 and began working as a free-lance commercial artist.  His imagination and ability to innovate proved to be outstanding when confronted with challenges.  In just a few years, with a talented staff he had personally trained, he began to independently produce large pictorial art for international advertising corporations.  Along with this endeavor, he began painting fine art.  As the growing demand for his art increased, he realized that he had found his niche and now devotes himself fully to the field of fine art.

His attraction to and study of Koi brought him to the realization that through his paintings, he would be able to emulate the simple and rewarding pleasure of actually watching Koi.  Gilecki is,” pleased that the ‘effect’ translated so well into his art, allowing him to bring a small piece of Paradise into a viewer’s home.”

Gilecki likes to offer some information on the Koi themselves to show why he is so enthusiastic about them.  The more he paints them, he says, the more he discovers about their interesting and much debated history and origin, their individual characteristics, their apparent ability to recognize and respond to their keepers.  For instance, Koi are bred in every country and considered to be the most popular fresh-water, ornamental pond fish. Generally, they live 25 – 35 years. However, certain pedigrees can live much longer; there is a documented record of a koi that lived with a family in Asia for 3 generations. At 226 years old, Hanako was the longest living fish ever recorded. The years are counted on their permanent scales the same as the rings of a tree.

They are often referred to as “living jewels” or “swimming flowers.”  In Japan, they were referred to as “Warriors Fish” and “The Fish of Nobility since they were too costly for the average person to buy and keep.  Today, top quality Koi can cost as much as $25,000 with pedigree Koi values still climbing into the hundreds of thousands of dollars.

The ancestry of Koi has only been traced back a few hundred years. They are mystery and it seems, a relatively new species that evolved through selective breeding of natural genetically mutated “albino” common carp which populated the rice paddies

While their history and origin are much debated, Gilecki feels that even though he could paint Koi for his entire life, he still would not know it all.  “Creating a painting is a journey and returning with discoveries worth sharing and exploring, makes the journey worthwhile.”

Gilecki’s unique paintings of Koi have provided him with a seemingly endless source of inspiration.  As you look at his art, you are drawn into an intimate world between the surreal and the real — a world that fills you with an inner peace and a profound sense of calm. 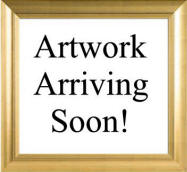 -painting professionally for over 25 years.
-travels  throughout the world in search of adventure and subjects to paint: Europe, Asia, Caribbean, Mexico
-has won numerous awards in Canada and the USA
-artwork in corporate and private collections in more than 25 countries

ARTIST WORKSHOPS:  is a teacher of artist workshops and has been teaching for over 15 years. 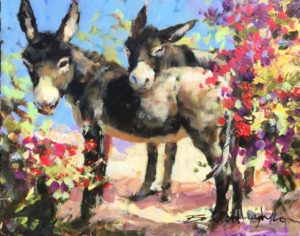 Click thumbnail for larger image
I’ve Got Your Back
by Brent Heighton
“These are some of the wild donkeys that hang around our place in Mexico……they love to help with our gardens as they seem to enjoy many of our plants.” – Brent Heighton ACCOMPLISHMENTS:
-Has painted professionally for over 20 years
-Owned for over 13 years an Art Gallery in Cabo San Lucas that became the benchmark of excellence for the art community in Southern Baja
-Has discovered that living ones life as an artist was the most important ingredient to becoming an artist.

TECHNIQUE:
My paintings are a ménage of life experience and creative energy. The landscapes, florals, portraiture and expressionist abstracts all reflect the vibrant colors of life as a contemplative artist inspired by the colors of Mexico and the beauty of my home in the Pacific Northwest. 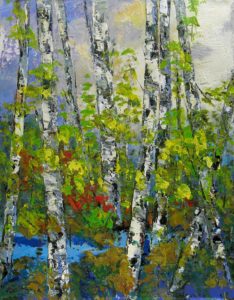 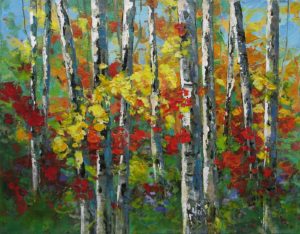 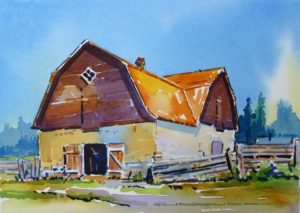 “The prairies east of Edmonton hold some of the charming relics of the past when farmers were creative with their use of brick and wood.  And buildings were not only functional, but also attractive enough to inspire the neighbors and to show individualism and personality.

For artists driving up and down back roads, it’s indeed a pleasure to stumble on a find like this.  Truly unique, this  one on the Letwin farm east of Lamont is a classic in spite of showing years of service and weathering.”
-Gregg Johnson 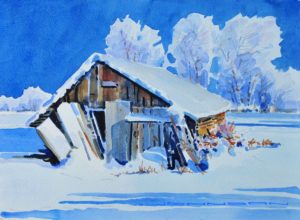 “This little gem probably started out its life as a garage or a small chicken coup, and then later graduated to the workshop or tool shed—-repurposed as so many out-buildings were back in the forties.  Found on a bachelor’s farm east of Mundare, it showed signs of being always a collector and never a down-sizer.  And its quiet character was even more “elegant” as a result of a heavy snowfall and subsequent hoar frost.”
– Gregg Johnson 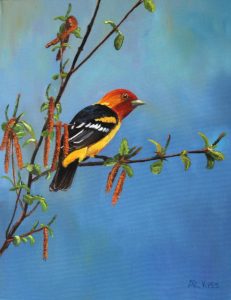 “I have always loved to do paintings of birds.
There is such a variety of species, never run out of ideas for compositions.”
– Andrew Kiss 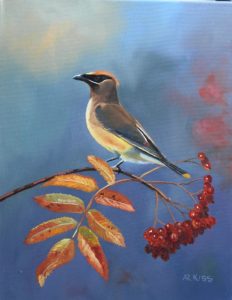 “I have always loved to do paintings of birds.
There is such a variety of species, never run out of ideas for compositions.”
– Andrew Kiss

In May, 2018, I was commissioned by the BC Children’s Hospital Foundation to create a painting for Vancouver’s new TECK Acute Care Centre. The painting measures 3 1/2′ x 9′, and is in the Party Animal genre….a multi-coloured group of grizzlies fishing at a waterfall. It was installed in October, just prior to the hospital’s opening.

BIOGRAPHY: Continuing to work in a representational style, I found that color, for its own sake, had the ability to influence the power and impact of a painting. In 1995 I was working on a painting of giraffes, whose astonishing shapes and contours seemed to lend themselves to an outrageous approach. I chose to introduce color totally outside the normal range, and the result was one of unexpected whimsy. This painting gave birth to the Party Animal Series, and was selected by USArt magazine as “Editor’s Choice” for wildlife.

The Party Animals remain a compelling force, transcending the genre of “wildlife art” and appealing to anyone looking outside the box.

Often my portraits or figurative paintings have a narrative quality, with a focus on dramatic lighting that emphasizes mood and emotion. But no matter what I’m painting, I want the image to convey a positive energy, allowing the viewer to connect with the joy of life. 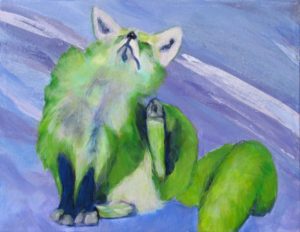